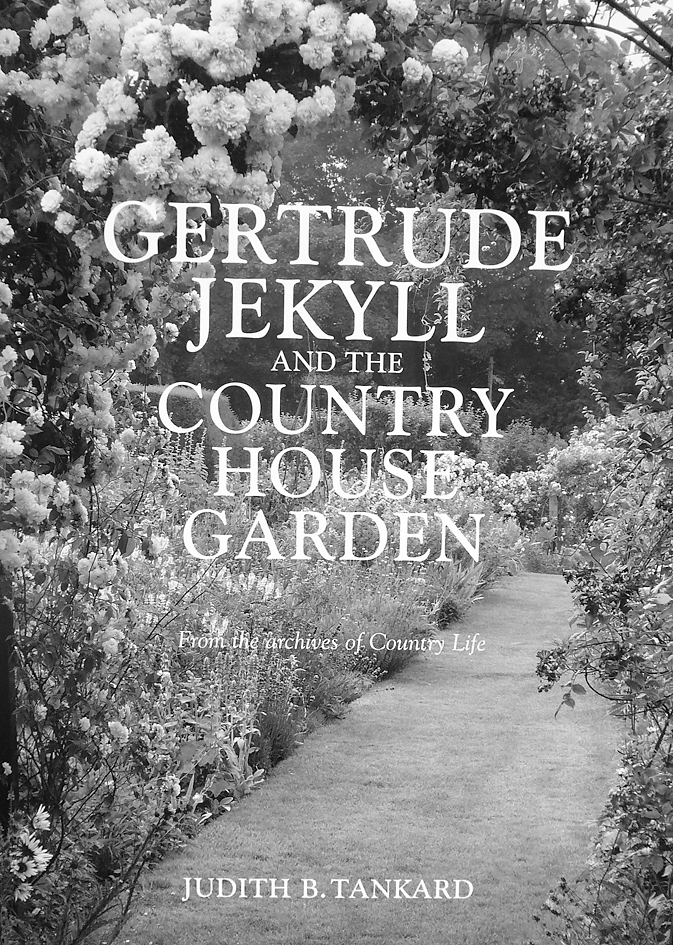 By Judith B Tankard

Judith Tankard is a well-known American landscape historian, who has taught at Harvard for 20 years. This is her eighth book on landscape history and her third on Gertrude Jekyll. The sections in the book are based on articles published by Country Life for which Gertrude Jekyll wrote many after she met Edward Hudson in 1899 at Munstead Wood. As Tankard says “One wonders if Jekyll’s fame as a garden writer would have been the same without Country Life… In 1900 Jekyll introduced Hudson to her young friend Edwin Lutyens… Hudson not only commissioned several houses and gardens from Lutyens, but also championed his work in the pages of Country Life to the exclusion of almost all other architects”.

Tankard’s thesis in this book is to establish the relative contributions of Lutyens and Jekyll in their garden design collaborations. As she says “Thanks to the incomparable record of Lutyens’ architectural career presented in the pages of Country Life, there are superb examples of his collaboration with Jekyll, unlike most of her other projects which are largely absent from the magazine”. She goes on “Even though some of her gardens with Lutyens were published in Country Life, oddly her name was rarely mentioned.”

The book is lavishly illustrated with photographs – some from the original Charles Latham photographs for Country Life or from her book with Lawrence Weaver Gardens for Small Country Houses (1912), plus some of Jekyll’s own photographs. However, wherever possible, Tankard has added her own beautiful up-to-date colour photographs.

The book is divided into four sections. The first section, of 28 pages Home and Garden (1900), is important, because, as Tankard says: “Lutyens’ style evolved from the early Surrey-vernacular style to classically inspired houses. Jekyll’s style, on the other hand, proved more static, and even well into the 1920s, when she was most in demand, her design solutions continued to be based on ideas she had formulated at Munstead House in the 1880s.” This included her famous coloured border, which she used in practically all her plans. This section also contains some rare colour photographs of the garden in 1912.

The second section follows Jekyll’s book Gardens Old and New (1901) which presents six of her favourite gardens: St Catherine’s Court, Somerset, Owlpen Manor, Gloucestershire, Cleeve Prior Manor, Worcestershire, Little Boarhunt, Hampshire, Great Tangley Manor, Wonersh, and Westbrook in Godalming, using some of the original photographs, although as Tankard says: “whether Jekyll advised on the garden layout is unknown but she did supply plants from her nursery.”

The third section Gardens for Small Country Houses does not, in fact, follow the contents of that book (1912), but is based on the partnership houses. It includes:
• Orchards, Munstead, Godalming 1899: “the gardens incorporate numerous features that would become signatures of their partnership”.
• Tigbourne Court, Witley 1899: “little more than an exquisite cottage garden”.
• Goddards, Abinger 1899: “maintenance needed to be kept simple”.
• Le Bois des Moutiers, France 1899: the owner had his own ideas about the garden.
• Deanery Gardens, Berkshire 1901: “the house and garden that would come to symbolise the genius of their partnership”.
• Marsh Court, Hampshire 1901: mainly Lutyens but water garden and flower borders by Jekyll.
• Milmead, Bramley 1904: (original 1912 photographs): “Jekyll’s numerous intensively planted borders…an engaging garden picture that Jekyll rarely had the opportunity to create for other clients”.
• Hestercombe, Somerset 1903: garden only, Jekyll’s planting plans were discovered in 1973 in the garden shed. “This large and complex garden remains one of the most inspirational of all the Lutyens/Jekyll collaborations”.
• Folly Farm, Berkshire 1906 and 1912: ”a truly collaborative design effort”, although Jekyll was not mentioned by Country Life).
• Lindesfarne Castle, Northumberland 1911: tiny walled garden.
• Gledstone Hall, Yorkshire 1923: (Jekyll 82), planting plans only, but Surrey plants did not flourish in Yorkshire.
• Plumpton Place, Sussex: (Jekyll 85) but produced detailed planting suggestions much praised by Hudson, who again failed to mention her name.

The fourth section Colour in the Flower Garden (1908) presents ten gardens which Jekyll designed on her own or in collaboration with other architects. “All were in one way or the other influenced by the Arts and Crafts movement”. These include Upton Grey, Hampshire 1908, Vann, Hambledon 1911, and Highmount, Guildford 1909.

This article has also been published in the Godalming Museum Newsletter

Harold Peto Travel Diaries Volume 1: Book Review
Scroll to top
This website uses cookies to improve your experience. We'll assume you're ok with this, but you can opt-out if you wish.Accept Read More