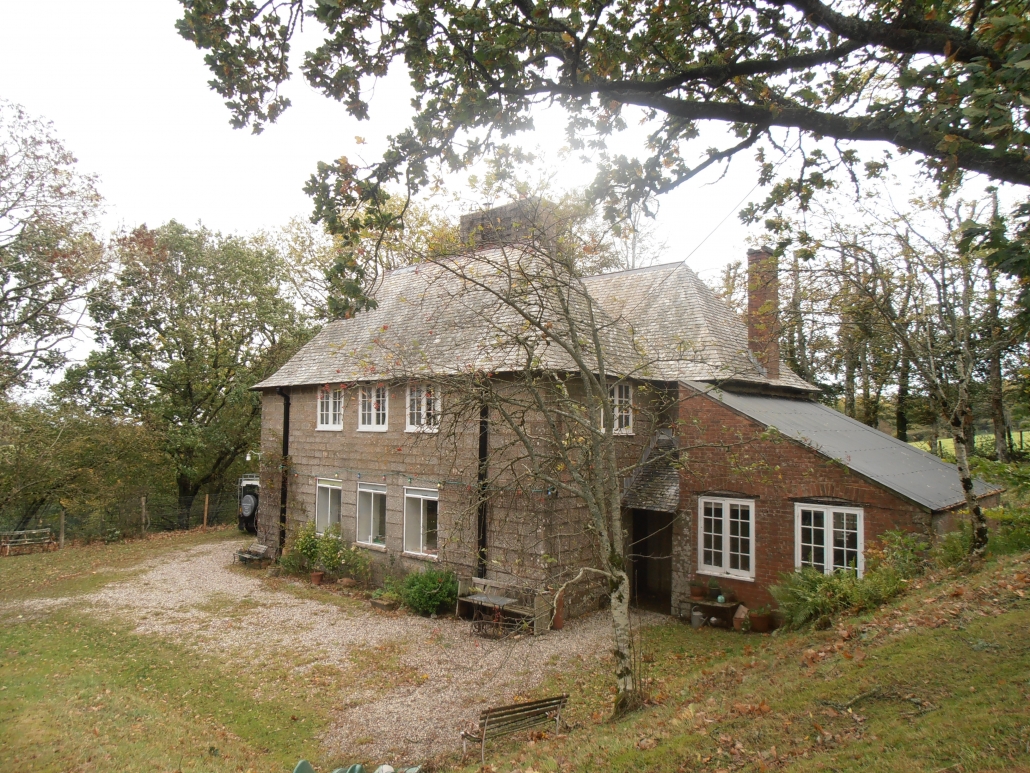 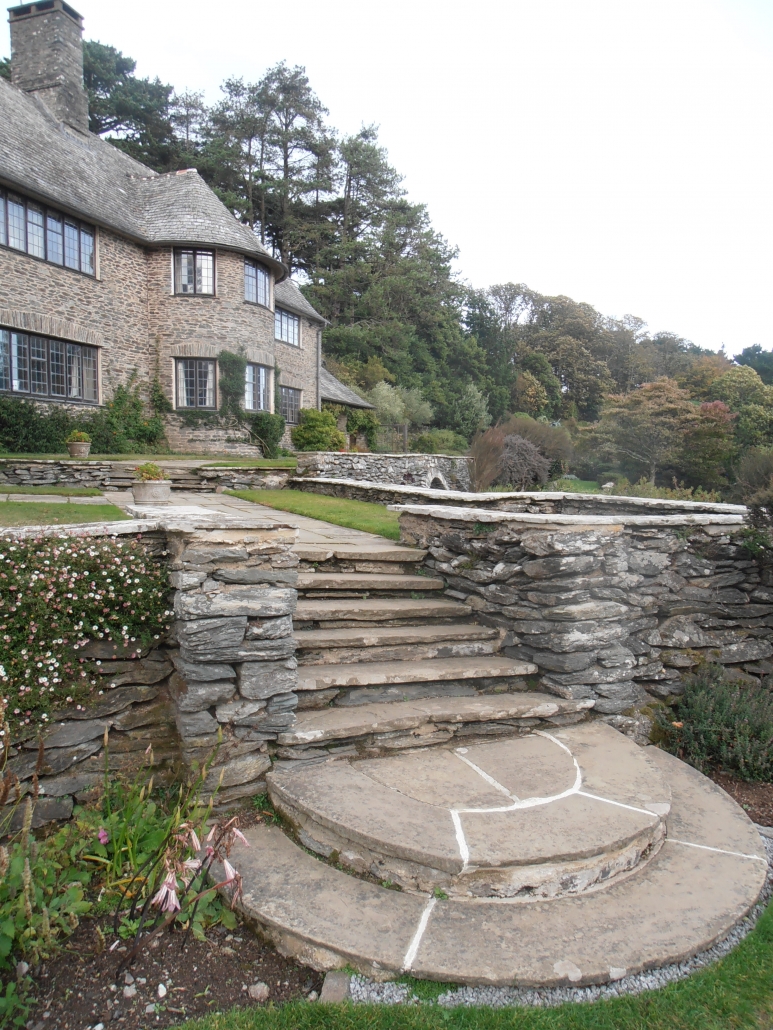 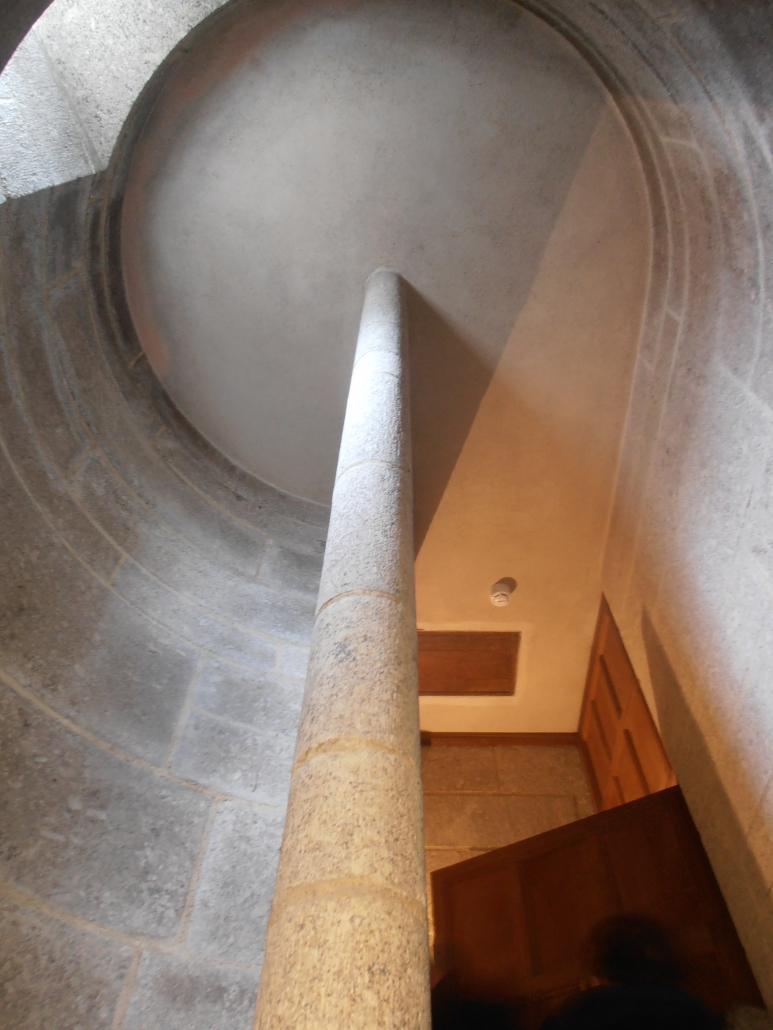 Several Trust members had arranged to visit Edwin Lutyens’s Castle Drogo in Devon for an exclusive tour that was to include many places not normally on the public route. Unfortunately, “Storm Callum” broke over the castle on Friday, the day before our tour was to start, so the untameable Dartmoor weather ruled this out, forcing the entire National Trust site to be closed during our proposed visit.

But determined not to be defeated, some of us decided to meet on Saturday morning at Fingle Bridge in the Teign Gorge below the castle to explore interesting spots nearby but outside National Trust land accessible via a public footpath. The River Teign was flowing rapidly but the high footpath led us safely to Lutyens’s Turbine House where we could peer through the windows at its original turbines, which still supply the castle — or more accurately its visitor centre — today, some 87 years after they were first installed. Back on relatively dry land, we met Ruth (Bunny) Johnstone, great-granddaughter of Julius Drewe — who commissioned Lutyens to design the castle for him around 1910 — at the Church of the Holy Trinity in Drewsteignton. Here we were able to pay our respects family only recently discovered, and clearly mirrored the style of the castle.

Later, at the nearby Drewe Arms, hot drink in hand, we were joined by Jill Smallcombe, an artist and the castle’s Training and Skills Coordinator, for an informal talk on the castle’s history, right up to the current project work. Bunny told us some amazing anecdotes about her time there, including an amusing tale of when Edwin met her father Anthony, who was 14 at the time, at dinner. Lutyens asked the boy if he liked pretty women, and, on receiving an affirmative answer, Lutyens, using condiments as paints and the white tablecloth as his canvas, proceeded to sketch a buxom young woman. Rather shocked, Anthony’s mother ordered that the cloth be sent straight to the castle’s laundry — also designed by Lutyens.

Bunny and her husband, Patrick, then kindly took us up to the very same building, called Laundry Cottage — or Castle Cottage — which the family still owns and leases out. In many ways a mini-Drogo, it is made of solid granite with large wooden windows and nestles near the bottom of the castle’s drive. Its understated, well-designed interior has a ceiling-hung drying rack in the first
room, as you enter on the left, and laundry room on the right. The rooms are generously proportioned with simple yet elegant fireplaces with coloured tiles and deep windowsills. The gamekeeper lived here, too, and, upstairs, the laundry maids’ rooms were separated from the gamekeeper’s by a double-hinged door in the landing with a staircase at each end. Save for the drying rack, the original laundry equipment has been removed and stored in the castle’s stables. The National Trust intends one day to put the interesting early washing machine and other equipment on public display. Our thanks go to Bunny, Patrick and the cottage’s tenants for allowing us this visit.

With the castle off limits for the rest of the day, a large number of us then travelled to National Trust property Coleton Fishacre, near Kingswear, designed by Lutyens’s former assistant, Oswald Milne. A delightful building, it was constructed using stone from its own garden — from a quarry, that has since been relandscaped, below the gazebo. Evidence of Milne’s training under Lutyens can be seen in the rows of horizontal windows under the eaves and the skill with which the garden is set on an axis with the house and surrounding landscape. The interiors were largely Art Deco but the library again nods to Lutyens with its map of the local area painted over the fireplace and its weathervane connected to a dial over the map — much like the Max Gill map at Whalton Manor in Northumberland, extensively altered by Lutyens.

After a fantastic dinner back at The Drewe Arms, the remaining eight members of our party decided to stay on to visit the castle on Sunday. The next morning, two very welcoming staff members, Jill and Kristy, took us on an exclusive guided tour. This started in the Nursery Corridor (temporarily closed to the public), then continued to the top floor at the south end of the castle — its “Tudor” section, which included the guest bedrooms used by Adrian Francis Drewe, a grandson of Julius. We were also treated to a look “below stairs” – a little-seen area under the service corridor with its butler’s pantry-cum-safe room. Here a door beyond the kitchen led to the wood store — complete with coal chutes — then on to the boiler room and coal storage tanks. It is never open to the public, and originally only the servants would have seen it. Despite this it is beautifully finished with rounded columns supporting the many floors above and a herringbone-pattern brick floor. Even the solid granite walls are elegantly shaped and finished.

The only reason we could think of for this expensive, labour-intensive finish was that this room would have been one of the first parts of the building to appear rising from its foundations and thus a good opportunity for Lutyens to give Julius a foretaste of the luxurious castle that would be his. Our visit concluded with a tour around the public route and a fine lunch in the visitor centre. At this point, I must say a big thank you to Jill and Kristy for a fascinating tour.

West Coast Party of the Lutyens Trust America
Scroll to top
This website uses cookies to improve your experience. We'll assume you're ok with this, but you can opt-out if you wish.Accept Read More