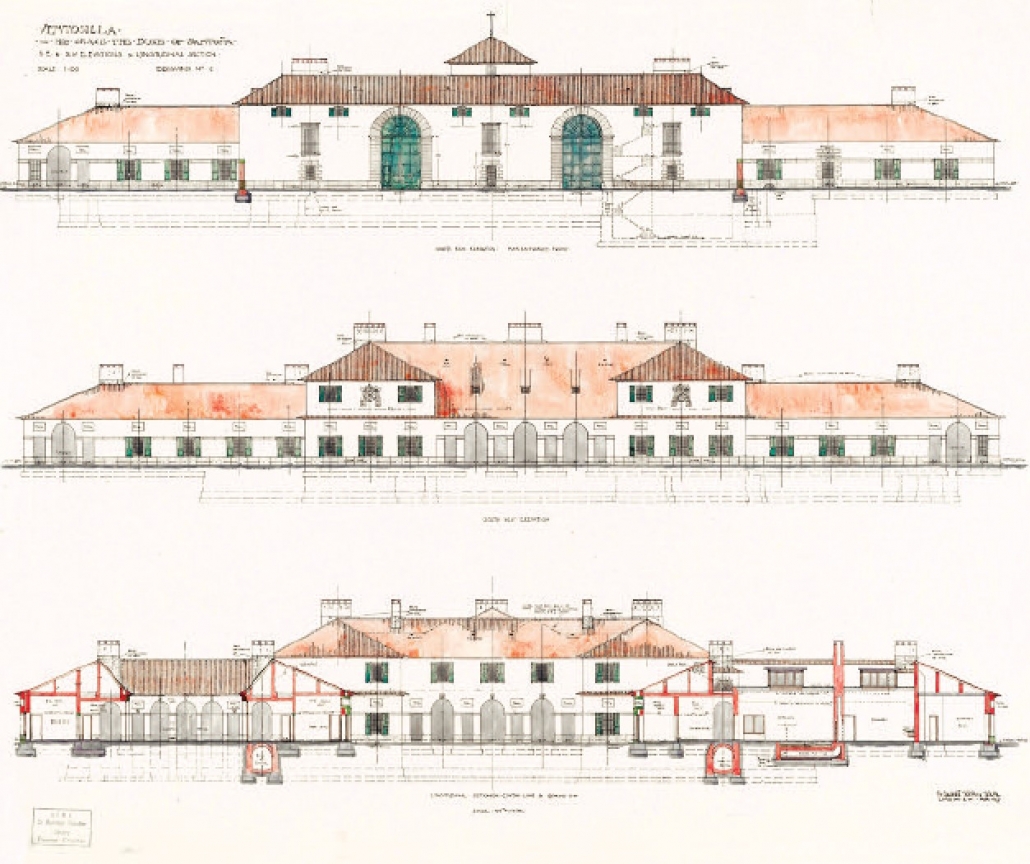 Lutyens drawing of the facade of a house for the Count of La Cimera, Spain © RIBA Collections

Spanish scholar and architect Iñigo Basarrate delivered an interesting lecture, aptly in Edwin Lutyens’s library in his former YWCA building, now The Bloomsbury hotel where the Trust holds its Christmas luncheon. He shed light on Lutyens’s career in Spain for four aristocratic clients from 1915 until the 1930s.

Tragically, due mainly to the Spanish Civil War, little of this survives. Lutyens’s career in Spain began in September 1915 at a party at Ashby St Ledgers given by his client Ivor Guest, where Lutyens met Hernando Fitz-James Stuart, Duke of Peñaranda de Duero and younger brother of the Duke of Alba. The two men got on well and Lutyens was invited to visit Spain, staying at the Albas’ luxurious Liria Palace in Madrid. Like Alba, the English-educated Peñaranda became a great friend of Lutyens.

Spain, neutral during the First World War, was now politically stable and undergoing a period of economic development while its Anglophile, polo and golf-playing upper classes commissioned English-style houses from British architects. In Madrid, Lutyens studied El Escorial and absorbed traditional architecture generally. On a second visit he met the King and Queen of Spain in Madrid. His immersion in grand Spanish life was all very enjoyable.

El Guadalperal near Cáceres, designed for Peñaranda, would have been one of Lutyens’s greatest country houses yet all that survives of it are some farm buildings. For Peñaranda’s sister, the Duchess of Santoña, Lutyens designed La Ventosilla, a country house near Toledo with a large patio and arcaded galleries of which the RIBA has some beautiful watercolours. But it too was not built, due to Santoña’s sudden bankruptcy, nor was a house for the rich Count of La Cimera, which for once was in an Italianate style.

After the catastrophic interruption of the Spanish Civil War, during which Liria Palace was largely destroyed and Peñaranda murdered, Lutyens was in contact with the Duke of Alba who became Spanish ambassador to Britain and commissioned him to restore his palace and provide designs for its interior. This was one of Lutyens’s last works and was realised after his death by a Madrid architect, though somewhat modified.

“Lutyens in London” – a Lecture by Dr Mervyn Miller
Scroll to top
This website uses cookies to improve your experience. We'll assume you're ok with this, but you can opt-out if you wish.Accept Read More